With several hospital admissions under our belts, we sadly seem to have become experts in the packing of hospital bags, remembering the “Comfy items” needed for a comfortable stay is a priority!

Topping my list is a decent jar of coffee, however, nothing beats us having our own pillows, cups and of course our slippers.  But as expert as we have become, no matter how many times I pack those bags, when I know the admission involves a trip to theatre it still fills me with nerves. 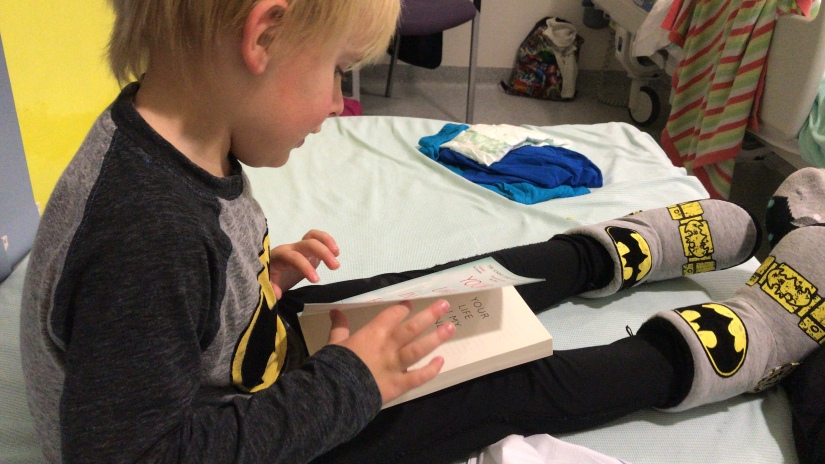 The purpose of this admission was to take samples from the lobes within the lungs to check for any growths, Chester’s history of growing pseudomonas has been problematic and having stopped antibiotic nebulisers at annual review in September on a trial basis, a check-up was required to ensure nothing sinister was lurking that hadn’t been captured on his cough swabs.

Following his first bronchoscopy, Chester was diagnosed with severe tracheomalacia and bronchomalacia, essentially floppy windpipe and airways, in some locations, up to 90% obstructed, which as you can imagine on top of CF is not the ideal combination, thick sticky mucus already clogging the airways, on top of severe obstruction makes an ideal bug breeding ground, and has potentially been the reason he has suffered from so many infections.

The hustle and bustle of medical professionals coming in and out prepping him for theatre helped to keep me preoccupied.  The care assistant weighing him, the nurse accessing his port and the anaesthetist doing their bit, followed by the Consultant explaining what they intend to do, how long it should take and detailing all the risks before asking for me to sign on the dotted line.

Having not needed a pre-med this time, Chester, being the independent, ‘I can do it’ little person he is, when given the choice to ride on his bed or walk to theatre, he obviously decided he wanted to walk.  Watching him trundle along in his new slippers and PJ’s behind his bed and a team of porters and nurses without a worry in the world made me feel immensely proud, yet incredibly sad.  Proud that nothing seems to faze him, but sad that this situation, whilst terrifying for most is something that he appears to be completely at ease with, like it is perfectly normal.

Sitting in the brightly lit, sterile smelling theatre with Chester cradled on my lap watching the IPad, the theatre staff bustling away behind me, checking their equipment, my nerves kicked in and my leg started to shake, I could see the anaesthetist pushing the white liquid anaesthetic into his port line and he gave me the warning that Chester would go under quite quickly.  I could feel his little body starting to slump as he started going limp, his eyes rolling, the physiotherapist who came in to watch the bronchoscopy took hold of the IPad for me before it dropped to the floor, and that was it, he was gone, fast asleep snoring.  As I laid him down on the bed fighting back tears, I gave him a kiss on his cheek and left the room, leaving him yet again in the hands of complete strangers.

I found myself trying to leave the theatre as quickly as possible as I had begun welling up, I stupidly felt embarrassed at feeling tearful and upset because he was only in for a bronchoscopy, but to me, no matter how many times I hand him over, it doesn’t get any easier.  I dashed off to get a coffee and some toast, not only because I was starving from not having had anything while Chester was nil by mouth but also to keep myself occupied, I then went back to his empty room to wait, wanting to be there when he came back.

Although the waiting felt like an eternity, it wasn’t long before he was back, fast asleep, snoring and hooked up to a SATs monitor which continuously bleeped, his face covered by an oxygen mask, the nervous wait to watch his oxygen levels rise to where they should be so the oxygen could be slowly turned down. Sat watching the numbers hovering around the 93% mark willing them to hit 95%.

I patiently waited for the Consultant to come and let me know what had been found.  The news he came with wasn’t great, he explained that despite their hope that the airways would have strengthened as he had grown, the obstruction was still there, and still just as severe, on top of that there were vast amounts of secretions in his lungs.

I felt my heart breaking all over, like I had failed him, that despite all our efforts in religiously carrying out his treatments and physio and going all out to ensure he was active, it all felt like it had been for no reason, that nothing we are doing seemed to be working.  I could see that the Consultant was disappointed that he wasn’t able to bring better news.  He advised the next step would be to discuss with the physio and our Consultant and try to devise a plan.  He left, leaving me feeling completely deflated.

I tell myself all the time not to get too complacent, because I know too well that when I have done in the past, something has come along and knocked me off my feet, but it seems I had forgotten my own rule again.  When things are going well it’s all too easy to think that we are doing well, especially when Chester has shown no symptoms of cold, flu or infection (touch wood) and he has had no bug growths, so to hear this, was completely unexpected and it served as a reminder that CF is unpredictable, that no matter how well someone can look, we never really know what is going on inside. My friend, a fellow CF mum explained that news like this, out of the blue feels like being hit in the face with a brick, and it’s so true, that is an excellent way to describe how it feels.

Despite feeling completely down in the dumps, like a complete failure, terrified again for Chester’s future, I am forced to remind myself to look at how far he has come, through the various obstacles placed in our path, each sent to remind us that CF is an unpredictable beast.  The hardest thing will be picking myself up again, but I know that I must be positive and stand by Chester ready to take on whatever we need to do to ensure that we do the best for this little guy who just keeps on fighting.