Usually I would be jumping at the chance to sit and have a child free coffee, to be able to drink it while it’s warm without one of my children kicking off because they’ve had to sit still for longer than five minutes or knocking my drink over whilst playing with their toy cars and trains. I often long to be able to just sit and enjoy the peace and quiet whilst taking in the local scenery, or what most would call people watching.

But yesterday as I sat in the coffee shop next to an empty high chair staring at my cappuccino, I have never wanted my boys to be with me so much. Feeling a little lost that there were no sticky hands or faces to wipe and feeling a little guilty that I wish so often I could have just 5 minutes to myself to enjoy my coffee.

Today was the sixth time we’ve handed Chester over in an anaesthetic room to a bunch of complete strangers who we find ourselves trusting with one of our very most treasured possessions. It really doesn’t get any easier, the only thing that made yesterday slightly less traumatic for me was the fact Chester was already out cold from his pre- Med so there was no physical fight to get him to sleep. As far as Chester is concerned he fell asleep in one place and woke up in another. 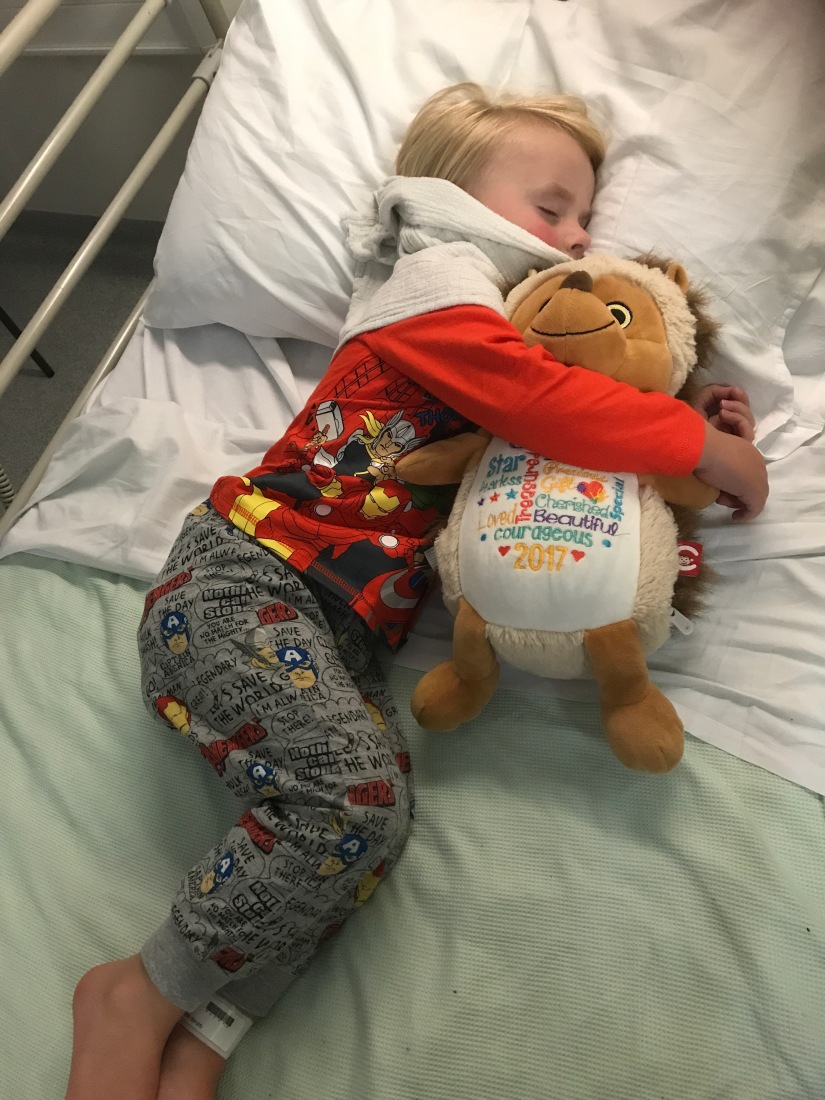 Knowing both the procedures would take some time, we made the decision to wait a couple of hours in the cafe, I find waiting in an empty room with a space where Chester and his bed should be too upsetting so we choose to spend our time waiting in the cafe or the parents room or walking the corridors, anything to avoid waiting in his room.

It is only a few hours of waiting but it’s agony, I cannot imagine what it must be like for parents waiting for children who are having timely procedures. For Chester both procedures are fairly straightforward but when the Surgeon starts to mention collapsed lungs, chest drains and perforated lungs just before the surgery whilst asking for consent, the hours of waiting feel like a lifetime and all those dreaded “what ifs” start to float round my head.

We have always been allowed to go to recovery to see Chester and yesterday was no different, it’s always a worry as we never know how the anaesthetic will have affected him. As we walked towards the cubicles I could hear his breathing straight away, and I was instantly relieved that I could hear him, his breathing was rattling and noisy but I didn’t care, he was still here and still fighting, that’s all that mattered to me.

Chester being the head strong stubborn little chap he is, was trying his hardest to sit up, despite being drowsy still and when he heard us he tried so hard to get to us, that the Doctor told me to get in the bed with him to keep him calm. There I am fully clothed in bed being pushed down the hospital corridors, snuggling with my baby and it was the best feeling in the world and right then nothing else mattered. I could smell the anaesthetic on him and I could see that he had a dressing on his left shoulder, I just wasn’t brave enough to look any closer at that time.

Back in his room we tried physio to release what we could from his lungs, the bronchoscopy had kicked up the mucus in his lungs and his cough was resembling a 90 year old, 50 a day smoker. He managed to cough up a lot and clear his lungs and airways a little which made him more comfortable. Then the regular poking and prodding, Oxygen levels, temperature and respiratory rate, putting on new probes and generally stressing Chester out part started.

All the time he was ratty and whinging all I could think about is the fact he made it and all went to plan and that was enough to allow me to listen to the whinging and whining noises he was making and be incredibly grateful.

This was a pretty tough decision for me as a parent, to put my child through something like this, to change him forever, to give him something that straight away makes him look “different”, but having just had one day of painless and stress free IVs I know I have made the right choice for Chester.

This little one has bounced back time after time, the resilience he shows amazes me, no matter what CF throws at him he stands up to show CF who’s boss, he’s by far the strongest person I know. I can’t help but think about the path ahead for this little guy, he’s already been through so much, I really hope CF gives him the break he deserves, but even if CF doesn’t I know Chester will kick arse and give CF a run for it’s money because he’s alr day showing he’s more than capable!

8 thoughts on “The waiting is the hardest.”