I’m not normally one for theme parks, I won’t lie they are pretty much my idea of hell! There’s the extortionate admission costs with some places even charging for car parking on top!

Then there’s the rides that aren’t included and the overpriced gift shops that you can guarantee you have no way of avoiding. Add on top hyperactive over excited children, endless queues and children going into meltdown when they get told they aren’t quite tall enough to go on the ride.

Despite all this I recently decided to treat the boys to a day out at Drayton Manor park, partly because it’s not far from where I live and also because Chester adores Thomas the Tank. 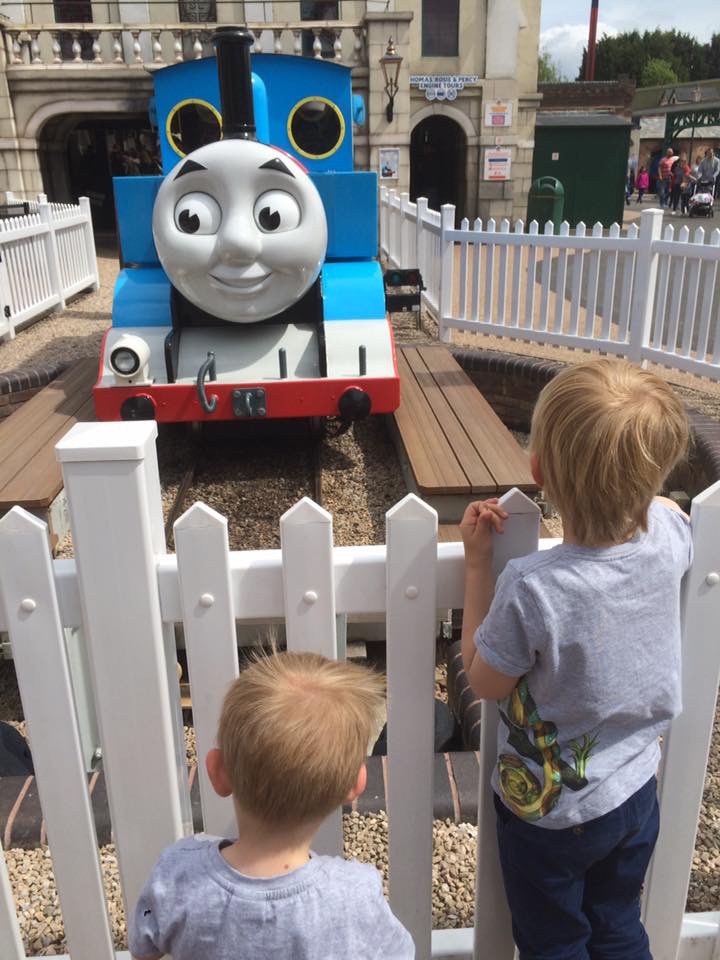 Now that Chester is 2 and being disabled he got into the park and was given a wrist band and a card which entitled him to queue with other disabled children at a separate entrance and get on a few of the rides quicker.

It was a warm and sunny day which was fantastic, but also problematic for Chester as the warm weather not only makes him sweat a lot and loose salt, the ciprofloxacin antibiotic he is currently on reacts badly in the sun causing sun burn and rashes even with minimal exposure.

Being able to ‘queue jump’ meant he could enjoy the day without any risk to his health which was brilliant. That said we didn’t need to use this on every ride as some rides didn’t have queues.

To start with I didn’t really want to use the queue jumping ticket, purely because I didn’t want to draw any attention to Chester but as the queues were getting longer and the day hotter we used it more.

I was absolutely gutted to hear people making comments and passing judgement over me and the boys as we queued at the disabled entrance of the rides.

I noticed an older lady who was talking to what I assumed was her daughter and granddaughter, was pointing in our direction, I overheard her saying that there was clearly nothing wrong with Chester’s legs so it was probably one of those “made up” conditions people these days use.

I am pretty sure people and doctors don’t just “make up” conditions!

I was really quite hurt and I almost felt like I had to justify why I was stood where I was. I was also hoping that Oakley hadn’t overheard her.

Who makes judgements like that, I was appalled and couldn’t help but just stare at her, she must have realised I had overheard her because she started to look a little embarrassed, but I just kept staring in complete disbelief.

Sadly, this wasn’t an isolated incident and she wasn’t the only person who felt the need to make such rude and hurtful comments, to the point I contemplated leaving, there’s only so many times you can hear people talking about you as if you are a fraud, with comments like “they’re clearly blagging it”, “he looks perfectly fine to me”, “people these days do anything to queue jump”.

But above all those comments the worst thing I heard all day was from another child and that was “I wish I had something so I could get one of those bands to jump the queue, it’s so unfair”. I found this really sad, especially when the parent made no attempt to talk to the child about what they had said. Had that been my child I would have had to say something. Let’s face it I’m sure anyone with a disability would gladly hand that over with their queue jumping ticket to be disability free!

Despite being made to feel like a complete fraud, which of course I am not, I stood my ground, I was determined that these people wouldn’t ruin mine and my boys day. All that mattered was that my boys enjoyed themselves, who cares if they stare and talk.

I just a find it sad that people could make such a judgement, just because you can’t see a visible disability it doesn’t mean it’s not there. I get that Chester looks so well, but looks can be deceiving, inside where we can’t see he’s putting up a huge fight.