I have to admit I’ve never been one for superstition, legends or alternative therapy but as far as CF goes, I’m willing to listen to anyone with advice on safe alternative practices or remedies.

During my trip last week in the Scottish Highlands I came across a Well in a woodland. I was surprised at the rags, clothing and linen that were hanging in the trees and although a little eerie I did go for a walk amongst the rotting cloth to take a closer look. 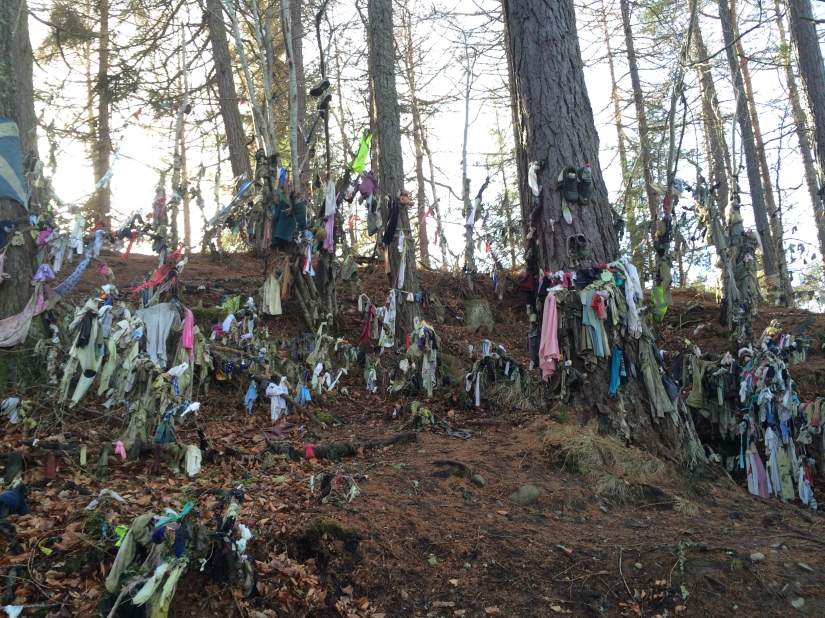 Amazed at what I saw, babies clothes, muslin cloths, shoes, socks and teddy bears, I turned to the Internet to see what it was all about.

I read about the tradition of hanging rags or “cloot” at the Well as an offering as part of a ritual.

All part of an ancient tradition mainly adopted in Ireland and Scotland, whereby pilgrims would place rags or clothing “cloot” or “clootie” of a sick child near the Well mouth as an offering. It was believed that as the rag began to rot the illness of the child would start to disappear.

It was also documented that the sick children would sometimes be left by the Well overnight in the hope their illness would be cured. Being that I couldn’t really leave Chester there overnight, I soon found myself digging around in my bag for something belonging to him.

I guess I thought anything no matter how far out it seemed was worth a go.

Oakley and I went back to the woods and tied the cloth to the tree above the Well which will be there now until it rots, another offering from a desperate parent with a sick child.

Don’t get me wrong, I’m not stupid, it’s pretty obvious to me that CF isn’t going to leave Chester without medical and scientific help, but where’s the harm?

I am willing to try anything, placing that rag on that tree with the other offerings made by other hopeful parents made me feel a little better for trying something new.

2 thoughts on “The Clootie Well – How far would you go to help your chronically ill child?”